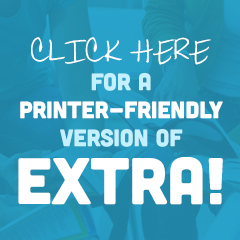 The Point: Sin is no longer my master—Jesus is.

Use this story to talk about our inability to overcome sin on our own, and our ensuing need for Jesus.

Scientists have taught bees to play soccer. Well, not really, but they have found that bees can learn to do rather amazing things. Even though their brains are tiny, having only one million neurons as compared to human brains with over 100 billion neurons, bees can learn new tricks or new habits that aren’t found in nature.

Recently, researchers at the Queen Mary University of London trained bees to push small balls into a goal for a reward of sugar water. Researchers were surprised by how easily the bees could learn to perform a task that did not mimic anything they do in their natural habitat. The researchers found that the bees learned even faster when the scientists demonstrated the behavior with a plastic bee. When the bees saw other bees performing the ball trick, they learned even quicker. So, maybe you can teach an old dog new tricks?

Here is a short video of the research.

There is a common teaching in our culture that says we can do anything we put our minds to. As children, we are often taught that we can be anything, do anything, accomplish anything we want, given enough hard-work and discipline. However, as we grow up, we find that not everything works out that way.

Ask your group to share examples of hobbies they’ve tried that didn’t work out (e.g. oil painting, soccer, gourmet cooking). Be prepared with an answer of your own. It can be light-hearted.

One area that can be exceedingly frustrating is the habit of sin. Like Paul, we know what we should do, but we don’t do it (see Romans 7:15-8:2). No amount of sugar-water rewards can change some of our habits. There is great news, though: in Jesus, we have already overcome sin and the wages of sin, which is death.

Point your group toward the victory over sin you will explore in this week’s study.

— Nikki Wilbanks is a stay-at- home mom, writer, Bible study leader, and commercial real estate appraiser/investor. She graduated from Pepperdine University, and lives with her husband and two children in Murfreesboro, TN.

After the group has discussed the opening question, read the following excerpt from John Bunyan’s Pilgrim’s Progress. (The full passage is available at www.sacred-texts.com/chr/bunyan/pp03.htm.) After reading these three paragraphs, ask someone to share a brief testimony of his or her own sense of the burden of sin being lifted by Christ. [This idea supports the group plan in Bible Studies for Life: KJV Adult.]

Now I saw in my Dream, that the highway up which Christian was to go, was fenced on either side with a Wall, and that Wall is called Salvation. Up this way therefore did burdened Christian run, but not without great difficulty, because of the load on his back.

He ran thus till he came at a place somewhat ascending, and upon that place stood a Cross, and a little below in the bottom, a Sepulchre. So I saw in my Dream, that just as Christian came up with the Cross, his Burden loosed from off his shoulders, and fell from off his back, and began to tumble, and so continued to do, till it came to the mouth of the Sepulchre, where it fell in, and I saw it no more.

Then was Christian glad and lightsome, and said with a merry heart, He hath given me rest by his sorrow, and life by his death. Then he stood still awhile to look and wonder; for it was very surprising to him, that the sight of the Cross should thus ease him of his Burden. He looked therefore, and looked again, even till the springs that were in his head sent the waters down his cheeks. Now as he stood looking and weeping, behold three Shining Ones came to him and saluted him with Peace be to thee; so the first said to him, Thy sins be forgiven: the second stript him of his Rags, and clothed him with Change of Raiment; the third also set a mark in his forehead, and gave him a Roll with a Seal upon it, which he bid him look on as he ran, and that he should give it in at the Coelestial Gate. So they went their way.

Use the following information to supplement Question #5.

Say: Freedom House is a non-governmental organization that publishes an annual report called “Freedom in the World.” In these reports they assess political freedom and civil liberties in countries around the world. In their 2017 report, they list these key findings:

* The Middle East and North Africa region had the worst ratings in the world in 2016, followed closely by Eurasia.

Say: There are many countries and people around the world, who are not free today – in the ways that Freedom House measures freedom. But there is a true freedom available to us that only Jesus can provide.

Then read Question #5 (How can we help one another live out the freedom Jesus has made available to us?) and invite volunteers to respond to the question.

When you have the freedom to spend a day any way you like, what do you like to do?

What’s your first reaction when you realize you’ve messed up?

In your life, who extends forgiveness quickly and freely?

When have you seen a stunning display of power?

In what ways do we become slaves to sin?

In what ways does Christ free us from our slavery to sin?

In what practical ways can we deny our sin nature?

In your own words, what does it mean to be dead to sin?

How has a death to sin given you new life?

What kind of life does Christ offer us?

What does it mean that Jesus died “once for all”?

Are believers dead to sin’s temptation or to sin? What’s the difference?

Where have you seen the danger of incremental sin in today’s culture?

What does it look like to put into practice the teaching found in verses 12-14?

What Scripture passages help you fight against sin’s temptation?

Often, we categorize some sins as “small” or “inconsequential.” What should our response be to these kinds of sins? Why?

Sin is Not Your Master