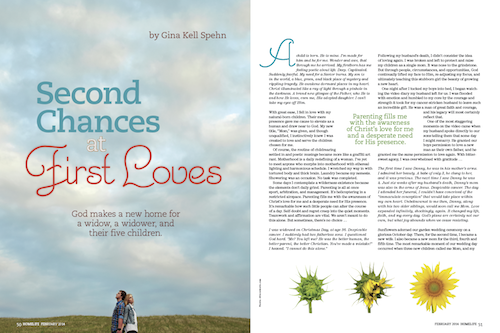 God makes a new home for a widow, a widower, and their five children.

A child is born. He is mine. I’m made for him and he for me. Wonder and awe, that through me he arrived. My firstborn has me feeling poetic about life. Deep. Captivated. Suddenly fearful. My need for a Savior burns. My son is in the world, a blue, green, and black place of mystery and rippling tragedy. He awakens dormant places in my heart. Christ illuminated like a ray of light through a pinhole in the darkness. A brand new glimpse of the Father, who He is and how He loves, even me, His adopted daughter. I can’t take my eyes off Him.

With great ease, I fell in love with my natural-born children. Their mere presence gave me cause to elevate as a human and draw near to God. My new title, “Mom,” was given, and though unqualified, I instinctively knew I was created to love and serve the children chosen for me.

Of course, the routine of childrearing settled in and poetic musings became more like a graffiti art rant. Motherhood is a daily redefining of a woman. I’ve yet to meet anyone who morphs into motherhood with ethereal lighting and harmonious schedule. I wretched my way in with tortured body and thick brain. Laundry became my nemesis. Showering was an occasion. No task was completed.

Some days I contemplate a wilderness existence because the elements don’t daily grind. Parenting is all at once sport, arbitration, and management. It’s helicoptering in a restricted airspace. Parenting fills me with the awareness of Christ’s love for me and a desperate need for His presence. It’s remarkable how such little people can alter the course of a day. Self-doubt and regret creep into the quiet moments. Teamwork and affirmation are vital. We aren’t meant to do this alone. But sometimes, there’s no choice…

I was widowed on Christmas Day, at age 36. Despicable cancer. I suddenly had two fatherless sons. I questioned God hard. “Me? You left me? He was the better human, the better parent, the better Christian. You’ve made a mistake!” I heaved. “I cannot do this alone.”

Following my husband’s death, I didn’t consider the idea of loving again. I was broken and left to protect and raise my children as a single mom. It was nose to the grindstone. But through people, circumstances, and opportunities, God continually lifted my face to Him, re-adjusting my focus, and ultimately teaching this stubborn girl the beauty of growing a new heart.

One night after I tucked my boys into bed, I began watching the video diary my husband left for us. I was flooded with emotion and humbled to my core by the courage and strength it took for my cancer-stricken husband to leave such an incredible gift. He was a man of great faith and courage, and his legacy will most certainly reflect that.

One of the most staggering moments on the video came when my husband spoke directly to our sons telling them that some day I might remarry. He granted our boys permission to love a new man as their own father, and he granted me the same permission to love again. With bittersweet agony, I was overwhelmed with gratitude …

The first time I saw Danny, he was in his mother’s arms. I admired her beauty. A babe of only 3, he clung to her, and it was precious. The next time I saw Danny he was 4. Just six weeks after my husband’s death, Danny’s mom was also in the arms of Jesus. Despicable cancer. The day I attended her funeral, I couldn’t have conceived of the “immaculate conception” that would take place within my own heart. Unbeknownst to me then, Danny, along with his two older siblings, would soon call me Mom. Love expanded infinitely, shockingly, again. It changed my life, faith, and my every day. God’s plans are certainly not our own, but what joy abounds when we cease resisting.

Sunflowers adorned our garden wedding ceremony on a glorious October day. There, for the second time, I became a new wife. I also became a new mom for the third, fourth and fifth time. The most remarkable moment of our wedding day occurred when three new children called me Mom, and my two sons called a new man Dad for the first time. I was so overjoyed I thought my heart might burst. What an unabashed display of love from five children who had suffered so much! They understood that there was no betrayal of their deceased parents and no fear of rejection.

Parenting fills me with the awareness of Christ’s love for me and a desperate need for His presence.

Most adults couldn’t believe what they heard that day. Some looked confused, even hurt, but others immediately recognized the gift of love being exchanged. We’d been granted permission to live and love again. The love that our late spouses lived out in their final days provided the seed of truth that Christ Himself taught us in Scripture: Love isn’t a zero sum game. We don’t have to take love from one to give to another. Love, true love, simply grows.

Six years later, some people are still taken aback when they hear all five kids call me Mom. One of my great joys on earth is that I’ve been chosen to love and raise another woman’s children. It’s a responsibility and privilege like no other, and my husband treasures guiding two new sons into manhood.

Our loved ones who have gone before are present in the abiding love that has blended and bonded our new family. We do our best to keep them present tense. The truth is, there are nine people in our family. It’s just that two have already been called home. We’ll be together in the great reunion. Until then, we’ll continue to grow new hearts along the way.

Although we were widowed, much of what we’ve learned applies to families of divorce. There are, however, some unique differences. In divorced families, children deal with essentially two “lost” parents. Though no one has died, it feels like dad is missing when the child is with mom and vice versa. Children often feel alone in love for the other parent. In order to protect the hearts and minds of the kids, it’s critical for parents to maintain the utmost respect for their ex regardless of hurt feelings.

If you’re in a new relationship, don’t risk the children, if it’s even a remote possibility the relationship will not survive. Until you’re certain, don’t confuse children by bringing a new person into their lives. This kind of risk-taking can be detrimental to the child’s ability to have a healthy understanding of intimate relationships. That said, if your ex is deeply involved with another person, you should grant your kids permission to grow a new heart for that person. Be a safe place for your children if they need to talk about their fears and concerns. Lead with the love of Christ and make the children a priority above your own desires.

Love isn’t a zero sum game. We don’t have to take love from one to give to another. Love, true love, simply grows.

Gina Kell Spehn is wife to Michael and mom to five kids. She’s the co-founder and executive director of the New Day Foundation for Families, a nonprofit dedicated to helping young families affected by cancer. Gina is also the co-author of the New York Times bestselling memoir, The Color of Rain, about how two families find faith, hope, and love in the midst of tragedy. The Color of Rain is currently being made into a movie for the Hallmark Channel (airdate TBD). She is a national speaker and co-host of Your Family Matters, a weekly radio talk show in Detroit.

This article first appeared in the February, 2014 issue of HomeLife. Subscribe