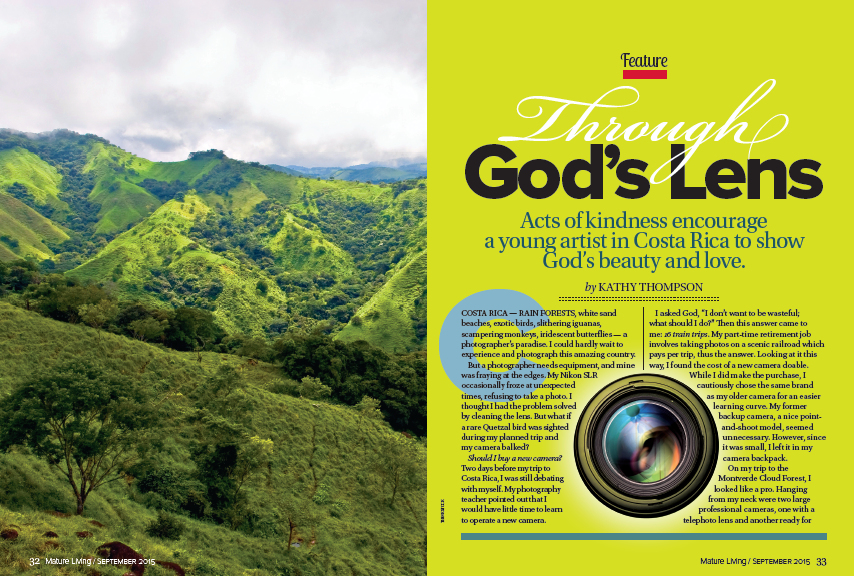 Acts of kindness encourage a young artist in Costa Rica to show God’s beauty and love.

But a photographer needs equipment, and mine was fraying at the edges. My Nikon SLR occasionally froze at unexpected times, refusing to take a photo. I thought I had the problem solved by cleaning the lens. But what if a rare Quetzal bird was sighted during my planned trip and my camera balked?

Should I buy a new camera? Two days before my trip to Costa Rica, I was still debating with myself. My photography teacher pointed out that I would have little time to learn to operate a new camera.

I asked God, “I don’t want to be wasteful; what should I do?” Then this answer came to me: 16 train trips. My part-time retirement job involves taking photos on a scenic railroad which pays per trip, thus the answer. Looking at it this way, I found the cost of a new camera doable.

While I did make the purchase, I cautiously chose the same brand as my older camera for an easier learning curve. My former backup camera, a nice point-and-shoot model, seemed unnecessary. However, since it was small, I left it in my camera backpack.

On my trip to the Montverde Cloud Forest, I looked like a pro. Hanging from my neck were two large professional cameras, one with a telephoto lens and another ready for closer shots. By the end of our visit to the forest, my camera memory cards were full of astonishing photos.

Traveling with a friend who had retired to Costa Rica, I returned with her to her home. As an artist and retired teacher, Linda wanted me to meet Roberto Cantello, an 11-year-old Costa Rican artist. The local commu­nity of retired Americans had been purchasing his art and encouraging his special gift.

Sadly, Roberto’s family had recently been robbed in a senseless home invasion. The criminals had tied up the parents and three children and had stolen their only items of saleable value: their camera and computer. Without these, Roberto was unable to capture God’s beautiful creation and stay in contact with patrons and other artists.

A home invasion has many consequences. Fear, anger, and depression entered a formerly happy and safe home. All the family was suffering, but Roberto in particular.

Outraged, the family’s American friends mobilized to replace the lost items. A visitor brought a laptop computer that was no longer needed, and he planned to give it to the family. I knew what God wanted me to do and why the smaller camera was still with me. “He can have my Nikon camera,” I offered.

We arrived at the Cantello home on a Sunday afternoon. Roberto and his mother were still at church. He was so depressed that they had planned an afternoon of praying. His father, older brother, and sister were at home and welcomed us. Theirs was a simple home, sparse in furniture and luxuries. What the building lacked in opulence was made up for by the location. Perched on a ridge, the home furnished views that were breathtaking. Verdant mountains dropped away on the sides and behind the house. Up and down the trails along these mountains, Roberto had taken photographs of God’s handiwork.

Entering the living room, I was first drawn to Roberto’s paintings, which were hung gallery style on two walls. Images of flora, birds, butterflies, and insects filled the space — a veritable encyclopedia of Costa Rican beauty. Below were paint, brushes, and other artist’s tools.

I did not feel I was owed anything for my donation, but the group suggested beforehand that it would be appropriate to take a painting in exchange. Lisa, who had initially come to Costa Rica with World Vision International, translated. She explained to Roberto’s father how I felt that God wanted Roberto to have the camera. Stunned, Mr. Cantello began to cry.

We viewed Roberto’s artwork, and I chose a painting of a butterfly in a rain forest. Turning toward the door, I glimpsed another image. A single painting capti­vated all of us with its beautiful representation of Mary and a young Jesus. “It is Russian; he found it on the Internet,” the father explained. As an art teacher of many years, I had already recog­nized the format of a Russian Orthodox icon. Yet the colors, shading, and sweet expression spoke of a Latinized image, unique and compelling.

“Is it for sale?” I asked Lisa. With great respect and compassion, she took the father out to the porch to discuss a possible purchase. Returning, she told me that there was $20 invested in materials; it was available at that price. “Of course not,” I replied, “Will $80 be enough?”

Lisa broke into a knowing smile and said, “One hundred dollars would be nice.”

Before we left, Lisa purchased a large painting of a parrot by Roberto and a smaller painting by his sister. Don, who had also accompanied us, picked up a previously commissioned canvas that he and Roberto had designed. Even as Roberto and his mother were praying that afternoon, four substantial purchases, a laptop computer, and a camera were all being given at the nudging of God to restore hope to this gifted boy and his family. God worked through a trial, bringing together people across the miles so beauty and love could be seen through God’s lens: “All things work together for the good of those who love God: those who are called according to His purpose” (Rom. 8:28).

KATHY THOMPSON is a retired art teacher of 37 years who now shares her talents in her church’s mural ministry. It was on a trip to teach character education in a Costa Rican school that she met Roberto. Kathleen and her husband live in the mountains of North Georgia. They have two children and two grandchildren whose families they love to visit.

This article originally appeared in Mature Living magazine (September 2015). For more articles like this, subscribe to Mature Living.