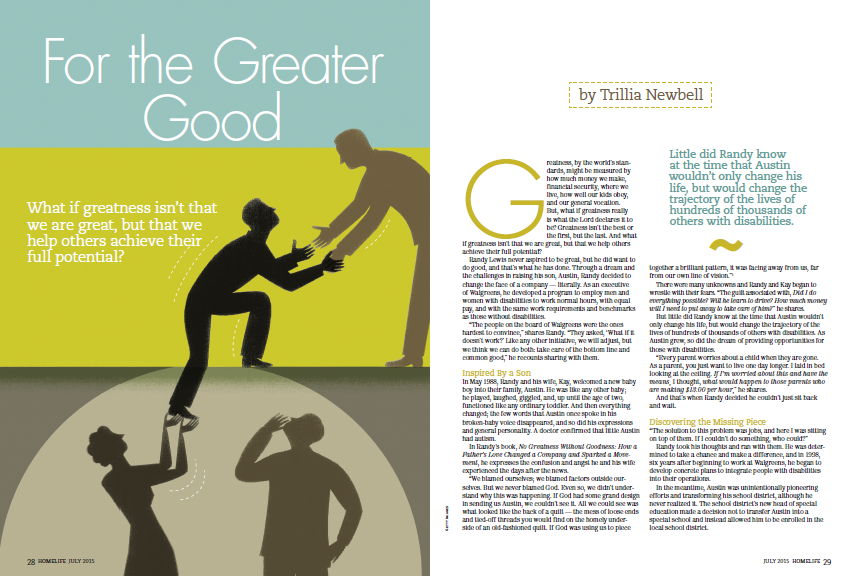 For the Greater Good

What if greatness isn’t that we are great, but that we help others achieve their full potential?

Greatness, by the world’s standards, might be measured by how much money we make, financial security, where we live, how well our kids obey, and our general vocation. But, what if greatness really is what the Lord declares it to be? Greatness isn’t the best or the first, but the last. And what if greatness isn’t that we are great, but that we help others achieve their full potential?

Randy Lewis never aspired to be great, but he did want to do good, and that’s what he has done. Through a dream and the challenges in raising his son, Austin, Randy decided to change the face of a company — literally. As an executive of Walgreens, he developed a program to employ men and women with disabilities to work normal hours, with equal pay, and with the same work requirements and benchmarks as those without disabilities.

“The people on the board of Walgreens were the ones hardest to convince,” shares Randy. “They asked, ‘What if it doesn’t work?’ Like any other initiative, we will adjust, but we think we can do both: take care of the bottom line and common good,” he recounts sharing with them.

Inspired By a Son

In May 1988, Randy and his wife, Kay, welcomed a new baby boy into their family, Austin. He was like any other baby; he played, laughed, giggled, and, up until the age of two, functioned like any ordinary toddler. And then everything changed; the few words that Austin once spoke in his broken-baby voice disappeared, and so did his expressions and general personality. A doctor confirmed that little Austin had autism.

In Randy’s book, No Greatness Without Goodness: How a Father’s Love Changed a Company and Sparked a Movement, he expresses the confusion and angst he and his wife experienced the days after the news.

“We blamed ourselves; we blamed factors outside ourselves. But we never blamed God. Even so, we didn’t understand why this was happening. If God had some grand design in sending us Austin, we couldn’t see it. All we could see was what looked like the back of a quilt — the mess of loose ends and tied-off threads you would find on the homely underside of an old-fashioned quilt. If God was using us to piece together a brilliant pattern, it was facing away from us, far from our own line of vision.”1

There were many unknowns and Randy and Kay began to wrestle with their fears. “The guilt associated with, Did I do everything possible? Will he learn to drive? How much money will I need to put away to take care of him?” he shares.

But little did Randy know at the time that Austin wouldn’t only change his life, but would change the trajectory of the lives of hundreds of thousands of others with disabilities. As Austin grew, so did the dream of providing opportunities for those with disabilities.

“Every parent worries about a child when they are gone. As a parent, you just want to live one day longer. I laid in bed looking at the ceiling. If I’m worried about this and have the means, I thought, what would happen to those parents who are making $13.00 per hour,” he shares.

And that’s when Randy decided he couldn’t just sit back and wait.

“The solution to this problem was jobs, and here I was sitting on top of them. If I couldn’t do something, who could?”

Randy took his thoughts and ran with them. He was determined to take a chance and make a difference, and in 1998, six years after beginning to work at Walgreens, he began to develop concrete plans to integrate people with disabilities into their operations.

In the meantime, Austin was unintentionally pioneering efforts and transforming his school district, although he never realized it. The school district’s new head of special education made a decision not to transfer Austin into a special school and instead allowed him to be enrolled in the local school district.

“Kay visited the school and spoke to the classes a few days before Austin’s arrival. During those years in primary school, Austin surprised us all. Although his communication skills were limited, we were grateful to see that his unique personality and humor had a place to emerge.”2

At that time, Randy was the senior vice president of Walgreens, and oversaw the supply chain. Inspired by his son, he hoped to fill positions in the distribution centers with at least eleven percent of the workforce representing those with disabilities. Randy and his team started by working with schools and implemented a work-study program. These initial initiatives didn’t create the jobs that he had hoped, so he went back to the drawing board.

He reflects in his book about failure, “Nobody likes failure. But the biggest danger in life — and in business — isn’t failure. It’s pretending that failure is the exception instead of what it really is: merely part of the process.”3

They hadn’t failed, they merely needed to rethink the approach, and by 2011, ten percent of Walgreens’ workforce would, in fact, be filled by those with disabilities. The change, and maybe even enlightenment, began with a young man named Chuck.

Chuck was the son of a manager at a distribution center who happened to also have Asperger’s syndrome. When Chuck began working in the distribution center, they strategically placed him in between two experienced female employees, and he worked — worked and danced, that is.

Chuck would dance whenever he saw a mistake in the distribution line. The distribution centers have color coordinated totes, so when he saw one that was not the color of his normal totes move by, Chuck would dance. Chuck taught those in the center a great lesson — that people with disabilities are capable of performing a job and meeting their standards. And it didn’t end there.

“Chuck was the missing piece in the plan,” writes Randy. “He also showed us that typical team members would accept individuals like him more readily than we imagined. He showed us that management could be flexible without giving away the store. Rules didn’t have to rule all the time.”4

“We realized it was just about an attitude and our screening process,” he said.

“After 2010, we made it. Same jobs, same pay, side by side, completely inclusive, same performance standards,” he says.

Naturally, people often ask Randy which form of a disability they are unable to hire, and he proudly answers, “We haven’t found any.”

Walgreens implemented the ATP—“Ask The Person” system. “If they only had one hand, we’d show them the job and ask them how they’d do it. What’s worse, not giving someone a chance because we think they’re going to fail?”

Austin is now 26 years old and still lives at home. He is much more independent than before, and works part-time at the local Walgreens retail store.

“I thank God that he is curious and amazing in his own way. He is troubled at times, mostly if he hears about people in trouble; he always wants to do well. At work, they say Austin will always stop and help other people if they are having problems. He reminds me, and everyone around him, of our own humanity and of that good person within us and that inner longing of being part of something bigger. I have become a better person because of my son, and he has no inkling of it,” Randy shares. After seeing the huge success of the Walgreens initiative, Randy developed a plan to equip companies, even competitors, for integrating their workforce. He invites other corporations to visit their distribution center in Anderson, and if they like what they see, he offers a training “boot camp.” Companies such as Lowe’s, Best Buy, Meijer, Proctor & Gamble, Colgate, T.J. Maxx, AT&T, and Auto Zone have all launched their own initiatives based on the Walgreens’ model.

“I hope people will realize the power they have to make a difference,” he shares.

Austin will never know how his life has affected many, but one day in heaven, when he has a new body and new mind, what is only seen and known dimly will be made clear. “

Austin helped me see a harsh reality about what these kids will face. He also helped me see what he can do, and the things he could do helped me see the possibilities for others. And then I had the courage to do it.”

1-4Excerpts taken from No Greatness Without Goodness: How a Father’s Love Changed a Company and Sparked a Movement. Copyright © 2014 by J. Randolph Lewis. All rights reserved.

Trillia Newbell is the author of United and Fear and Faith. She has also written for Desiring God, Christianity Today, Relevant Magazine, The Gospel Coalition, and more. She is the consultant on Women’s Initiatives for the Ethics and Religious Liberty Commission for the Southern Baptist Convention. Trillia is married to her best friend, Thern, and they reside with their two children near Nashville, Tenn.