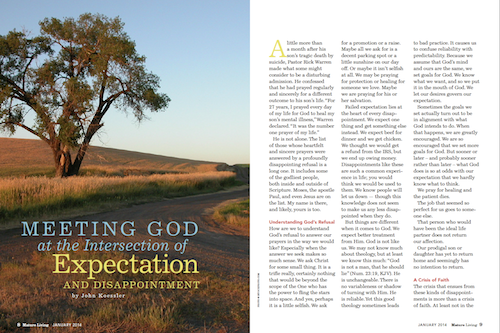 A little more than a month after his son’s tragic death by suicide, Pastor Rick Warren made what some might consider to be a disturbing admission. He confessed that he had prayed regularly and sincerely for a different outcome to his son’s life. “For 27 years, I prayed every day of my life for God to heal my son’s mental illness,” Warren declared. “It was the number one prayer of my life.”

He is not alone. The list of those whose heartfelt and sincere prayers were answered by a profoundly disappointing refusal is a long one. It includes some of the godliest people, both inside and outside of Scripture. Moses, the apostle Paul, and even Jesus are on the list. My name is there, and likely, yours is too.

How are we to understand God’s refusal to answer our prayers in the way we would like? Especially when the answer we seek makes so much sense. We ask Christ for some small thing. It is a trifle really, certainly nothing that would be beyond the scope of the One who has the power to fling the stars into space. And yes, perhaps it is a little selfish. We ask for a promotion or a raise. Maybe all we ask for is a decent parking spot or a little sunshine on our day off. Or maybe it isn’t selfish at all. We may be praying for protection or healing for someone we love. Maybe we are praying for his or her salvation.

Failed expectation lies at the heart of every disappointment. We expect one thing and get something else instead. We expect beef for dinner and we get chicken. We thought we would get a refund from the IRS, but we end up owing money. Disappointments like these are such a common experience in life; you would think we would be used to them. We know people will let us down — though this knowledge does not seem to make us any less disappointed when they do.

But things are different when it comes to God. We expect better treatment from Him. God is not like us. We may not know much about theology, but at least we know this much: “God is not a man, that he should lie” (Num. 23:19, KJV). He is unchangeable. There is no variableness or shadow of turning with Him. He is reliable. Yet this good theology sometimes leads to bad practice. It causes us to confuse reliability with predictability. Because we assume that God’s mind and ours are the same, we set goals for God. We know what we want, and so we put it in the mouth of God. We let our desires govern our expectation.

Sometimes the goals we set actually turn out to be in alignment with what God intends to do. When that happens, we are greatly encouraged. We are so encouraged that we set more goals for God. But sooner or later – and probably sooner rather than later – what God does is so at odds with our expectation that we hardly know what to think.

We pray for healing and the patient dies.

The job that seemed so perfect for us goes to some-one else.

That person who would have been the ideal life partner does not return our affection.

Our prodigal son or daughter has yet to return home and seemingly has no intention to return.

A Crisis of Faith

The crisis that ensues from these kinds of disappointments is more than a crisis of faith. At least not in the way we usually define faith. Our difficulty is not that we have set the bar so high that we must now come to terms with God’s inability to come through for us. Our problem is just the opposite. We know what God can do. We believe He can live up to our high expectations. We are not troubled because we have misread the signals so much as we are bothered by the fact that we have misread the character of the Sender. We are deeply disturbed because God has failed to do what we wanted Him to do. We are haunted by the fact that God hasn’t done what we know in our hearts He should have done.

One night during my second year of college, I asked God to reveal His will for my life. As I prayed, a plan seemed to stretch before me like a broad and shining path. I would transfer from the liberal arts college I was attending and enroll in Bible college and prepare for pastoral ministry. After graduation, I would marry my girlfriend Debbie.

My wife’s name is Jane.

A few weeks after I submitted my materials to the Bible college I had selected, I received a polite rejection letter, along with a list of other schools I might want to apply to instead. As trivial as this may seem now, at the time these two rejections rocked the foundation of my understanding of God. I did not doubt God’s existence. But I did question the wisdom of His judgment. I could not understand how He could get things so wrong.

In the early days of my Christian experience, I believed that the cup of grace was a draught without bitterness. What I once expected from my Christian experience is best summed up by the old worship chorus we used to sing that began, “Every day with Jesus is sweeter than the day before.” Since then, I have learned that the truth is more complicated. Some days are sweeter than others. Some are not sweet at all. Some days are just dull, and a few are more like a nightmare than a dream come true.

Over the years, I have noticed that the church has two basic approaches for dealing with this discrepancy between expectation and experience. One approach is to say that the problem is with us. We have not received what we wanted because we have not exercised enough faith. If God has not answered our prayers, we only need to ask Him again. Like Peter Pan urging the audience to will Tinker Bell back to life, we are told that we just need to believe harder and everything will work out. The other approach is more like the Marines. This line of reasoning basically says, “Life is hard, suck it up and get over it.” I do not find either approach to be especially helpful.

God’s refusal to grant our requests cannot always be blamed on our lack of faith. The example of Christ’s refused prayer in the garden of Gethsemane is proof enough that genuine faith does not always ensure we will get the answer we desire. In an essay entitled “The Efficacy of Prayer,” the British scholar and Christian apologist C.S. Lewis observed that although there are passages in the New Testament which seem to guarantee the invariable granting of our prayers, this cannot be what they mean: “For in the very heart of the story we meet a glaring instance to the contrary. In Gethsemane, the holiest of all petitioners prayed three times that a certain cup might pass from him. It did not. After that, the idea that prayer is recommended to us as a sort of infallible gimmick may be dismissed.”

Lewis is right. We should not draw hasty conclusions about the strength of our faith if our prayers are granted. It is equally true that we should not draw rash conclusions if they are not. The athlete who bows the knee after making a touchdown may be right in giving God the glory for his skill. But the fact that his team won the victory does not mean he enjoys more favor in God’s sight than the team that lost.

Failed expectation lies at the heart of every disappointment.

Our disappointment in prayer is really a function of our limited vision. We are disappointed because we do not know what God is really doing. Often we cannot know, at least not on this side of eternity.

This does not mean our only option is to suck it up and tough it out. Although we may not be able to grasp God’s mysterious purpose in refusing to grant our good request, we do know what God has already done. We know Jesus Christ died and arose on our behalf. We know He ascended to the Father’s right hand, where He always lives to make intercession for us. He has sent the Holy Spirit to comfort us in our disappointment. This is the hope of the gospel and the center of our faith. It is a faith which believes that God is as good as His word. And because He is as good as His word, His word is good enough to warrant our trust.

Past disappointment does not mean we should stop making requests. Neither should we lower our expectations when it comes to God. If anything, we should raise our expectations. The church’s impressive roll call of godly people who did not get what they wanted suggests that we should expect to encounter God at the most unlikely place of all — at the intersection of expectation and disappointment.

John Koessler serves as professor and chair of pastoral studies at Moody Bible Institute. His latest book is The Surprising Grace of Disappointment: Finding Hope When God Seems to Fail Us (Moody). He and his wife, Jane, live in Northwest Indiana.

This article originally appeared in the January 2014 issue of Mature Living. Subscribe