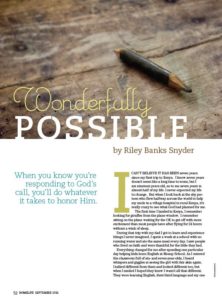 When you know you’re responding to God’s call, you’ll do whatever it takes to honor Him.

I CAN’T BELIEVE IT HAS BEEN seven years since my first trip to Kenya. I know seven years doesn’t seem like a long time to some, but I am nineteen years old, so to me seven years is almost half of my life. I never expected my life to change. But when I look back at the shy pre-teen who flew halfway across the world to help my uncle in a village hospital in rural Kenya, it’s really crazy to see what God had planned for me.

The first time I landed in Kenya, I remember looking for giraffes from the plane window. I remember sitting on the plane waiting for the OK to get off with more excitement than most people have after flying for 24 hours without a wink of sleep.

During that trip with my dad I got to learn and experience things I never imagined. I spent a week at a school with no running water and ate the same meal every day. I saw people who lived on faith and were thankful for the little they had.

Everything changed for me after spending one particular day helping kids learn English at Mosop School. As I entered the classroom full of six- and seven-year-olds, I heard whispers and giggles at seeing the girl with fair skin again. I talked different from them and looked different too, but when I smiled I hoped they knew I wasn’t all that different. They were learning English, their third language and my oneand only. The teacher would write on the blackboard words like ball and bear and sound out each letter as she wrote them. Each of the little voices would imitate their teacher in an attempt to learn English. Once it was their turn to write the words I would walk around the room and help the small hands as they drew wobbly letters to match the words on the board. After I helped one child and moved to the next, I noticed the child I had helped before had passed down his pencil to the next kid. The stubby pencil wasn’t even big enough to fit in the small hands of the child holding it. I thought, How are they ever going to learn a new language if they can only write two words a day because they have to share a pencil? These kids can finally afford to come to school but they don’t have the equipment they need to help them learn. I have an endless supply of pencils while they only have one.

Back Home from Africa

Once I got home, I decided to do something about what I experienced. I started a non-profit called Generation Next; our purpose was to give Kenyan kids the supplies they needed to grow academically and spiritually.

I returned to Kenya the following year with over 200 backpacks filled with donated school supplies. But it didn’t stop there. Due to the immense love for Kenya and its people, one trip always led to another and new projects were always on our hearts. Generation Next has grown from providing school supplies to hygiene items for young girls and opening a school for elementary students to learn for free. I have gone from worrying about missing my high school football game to worrying about the financial needs of a growing ministry. My mind is constantly on what needs to be done for Generation Next and for the Kenyan people. And there is really no other place I wish it to be.

In the Middle of Obedience

My story is one of simple obedi­ence. Obedience not just of me, but also of everyone who is a part of this story.

God changed my world and flipped it upside down, which I suppose is what normally happens when He calls and you go. Among the beautiful brown-eyed children of Kenya, God helped me discover my truest passion on this earth.

Life since Kenya has been anything but ordinary. I no longer look at my home with the same eyes and think about the same selfish things that were always on my mind. I am constantly converting everything in U.S. dollars to Kenya shillings, think­ing, Wow, that $20 shirt (that I totally would have bought without a second thought before Kenya) is actually 2,000 shillings and could almost buy a month’s worth of food for an average Kenyan family. Or thinking how just about everything at home is a luxury, from the carpet on the floor to the clean water running out of every faucet in our home, and constantly taking it for granted. My mindset is and always will be a bit different now and my actions are anything but what they were before.

Only God could have gotten me to where I am now. It hasn’t been an easy journey; I’ve had a lot of rude awaken­ings and heartaches, but looking back just makes me excited for what’s ahead.

There are many people who have known me for most of my life saying, “Who knew? Who knew this young, quiet girl would end up where she is today?” Most people, I think, have a hard time believing I would have turned into a brave young woman with an ever-growing passion to help people half a world away. One that puts herself in dangerous situations, that often leave her feeling uncomfortable and out of her comfort zone but fills her with happiness, ambition, and a love for her heavenly Father like no other time in her life. God’s calling on our lives might make us uncomfortable at first, but He knows us better than we know ourselves, and by simply trusting Him and being obedient to His call, we find ourselves where we least expect it. We fall in love with where He puts us more than we ever imagined we would and through it grows a relationship with Him that is unbreakable, which is what He most desires with His children.

Him. Whether that’s through teaching, coaching, scanning groceries at the store, or gathering pencils for students on the other side of the world, we can all be examples of Christ’s love.

If I’ve learned anything about calling from my time serving in Kenya, it’s this: You can do something because it’s possible, and you can do something because you can’t not do it. There is a major difference between the two. When you’re serving just because you can, the work is useful and beneficial and good. But you’ll stay committed to it only as long as it stays convenient. By contrast, when you’re serving in a capacity where you feel called, you’ll move heaven and earth in order to see it through. •

Riley Banks Snyder is the founder and executive director of Generation Next, a nonprofit she established at the age of fourteen. Riley’s heart is for Africa and for reminding every young person that they can do more to change the world than they could ever imagine. She lives in Branson, Missouri, with her family.

This article originally appeared in HomeLife magazine (January  2015). For more articles like this