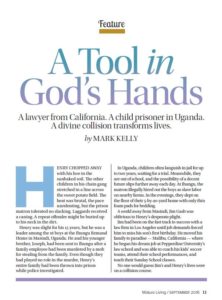 A Tool in God’s Hands

A lawyer from California. A child prisoner in Uganda. A divine collision transforms lives.

HENRY CHOPPED AWAY with his hoe in the sunbaked soil. The other children in his chain gang stretched in a line across the sweet potato field. The heat was brutal, the pace unrelenting, but the prison matron tolerated no slacking. Laggards received a caning. A repeat offender might be buried up to his neck in the dirt.

Henry was slight for his 15 years, but he was a leader among the 18 boys at the Ihungu Remand Home in Masindi, Uganda. He and his younger brother, Joseph, had been sent to Ihungu after a family employee had been murdered by a mob for stealing from the family. Even though they had played no role in the murder, Henry’s entire family had been thrown into prison while police investigated.

In Uganda, children often languish in jail for up to two years, waiting for a trial. Meanwhile, they are out of school, and the possibility of a decent future slips further away each day. At Ihungu, the matron illegally hired out the boys as slave labor on nearby farms. In the evenings, they slept on the floor of their 5-by-20-yard home with only thin foam pads for bedding.

A world away from Masindi, Jim Gash was oblivious to Henry’s desperate plight.

Jim had been on the fast track to success with a law firm in Los Angeles until job demands forced him to miss his son’s first birthday. He moved his family to paradise — Malibu, California — where he began his dream job at Pepperdine University’s law school and was able to coach his kids’ soccer teams, attend their school performances, and teach their Sunday School classes.

No one would guess Jim’s and Henry’s lives were on a collision course.

it began in 2007 when Bob Goff, a human rights lawyer, spoke to a group of Pepperdine law students. Goff was recruiting volunteers to help at-risk women and children held in Ugandan prisons without a lawyer.

Jim was glad to encourage students to join the project. It took three more years before the Lord got through to him that he had a mission for Jim, not just the students.

“I was helping those around me, sending them on mission trips. ‘There they are, Lord. Send them,’ was what my Bible said,” Jim explained. “About six years ago, my version became the true version of ‘Here I am. Send me.’”

Jim realized he was writing the story of his life for himself and needed to turn the pen over to God.

“That is the toughest thing for me — to not be in control of things, to not know what the next chapter looks like,” Jim said. “God was a supporting actor in my life, and He was doing an excellent job. But when I said, ‘You take the pen. You direct the story,’ that’s when everything changed.”

Jim joined a team headed to the remand home in Masindi. Along the way, a teammate told him “The Starfish Story” in which a boy saves a beached starfish by throwing it back into the ocean.

What Jim saw at Masindi deeply disturbed him. The concrete building warehousing the children was depressingly dark. Even worse was the fact these kids were trapped in limbo — forced to wait while an inefficient and often corrupt legal system ground slowly toward a trial date.

As Henry helped Jim interview the other prisoners, Jim realized Henry was his “starfish.”

“I marveled at Henry’s undaunted courage as he trusted that God would deliver him from his present condition,” Jim said. “I couldn’t escape the conviction that Henry was my starfish, and I needed to throw him back into the safety of the ocean.”

Over the next two years, Jim made multiple trips to represent Henry in court — at one point becoming the first white lawyer to argue a case in Ugandan court. God drew the two unlikely friends together as they faced one legal setback after another. In the end, Henry was released into the custody of a Christian ministry and set on a path toward a successful future.

In the process, Jim and his family were trans­formed as well. Their family bond deepened immeasurably. Where they at first disagreed strongly about going to Uganda as a family, they came to regard it as their second home. Jim’s daughter — who wanted to pursue a medical career but was terrified of needles — overcame her fear while serving in a mobile medical clinic in Uganda.

On top of that, Jim’s successful defense of Henry caught the attention of judges in the country, and he was invited to guide a process that ultimately will reform the entire Ugandan justice system.

Lives were transformed because God was in control of Jim’s story.

“I had morphed from a disengaged cheerleader into a reluctant participant in a one-time project and then into someone actively considering ways to improve the system,” Jim said. “I definitely did not identify with the man on the beach who heckled the boy throwing starfish; I was the boy seeking out starfish to throw.”

Years later, as he looked back on the entire experience, Jim found an even deeper meaning.

“I initially pictured myself as the boy, reaching down to pick up Henry and help him get back to the life God intended for him,” Jim said. “I am now convinced, however, that I am not the boy in that story after all. I am the starfish. I was the one stranded on the shore of apathy and indifference, needing to be thrown back into the sea of obedience and surrender.”

While it was Jim’s skill as a lawyer that God used to open the door to reform the justice system in Uganda, the Lord has given every believer abilities that He can use in equally powerful, life-transforming ways.

“I was just a tool in God’s hands,” Jim said. “We all can be that. There are needs all around us that God has given us the skills to meet. It’s just a matter of surrendering control and saying, ‘Lord, use me.’”

Editor’s Note: Jim Gash documents his amazing story in his book Divine Collision. The book is available in Lifeway Christian Stores and wherever books are sold. Jim Gash directs the Global Justice Program for Pepperdine University’s School of Law. He blogs at ThrowingStarfish.com.

MARK KELLY is a freelance writer in Marietta, Georgia. Hear the full interview with Jim on Mark’s website, godsrevolution.net.

This article originally appeared in Mature Living magazine (September 2016). For more articles like this, subscribe to Mature Living.