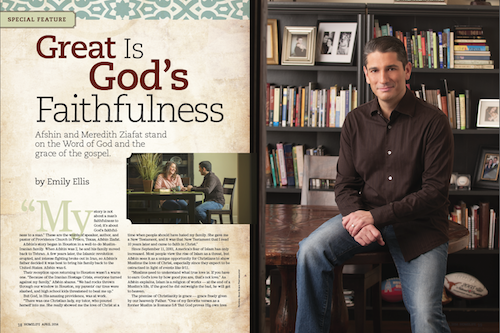 Afshin and Meredith Ziafat stand on the Word of God and the grace of the gospel.

Afshin’s story began in Houston in a well-to-do Muslim- Iranian family. When Afshin was 2, he and his family moved back to Tehran. A few years later, the Islamic revolution erupted, and intense fighting broke out in Iran, so Afshin’s father decided it was best to bring his family back to the United States. Afshin was 6.

Their reception upon returning to Houston wasn’t a warm one. “Because of the Iranian Hostage Crisis, everyone turned against my family,” Afshin shares. “We had rocks thrown through our window in Houston, my parents’ car tires were slashed, and high school kids threatened to beat me up.”

But God, in His amazing providence, was at work.

“There was one Christian lady, my tutor, who poured herself into me. She really showed me the love of Christ at a time when people should have hated my family. She gave me a New Testament, and it was that New Testament that I read 10 years later and came to faith in Christ.”

Since September 11, 2001, America’s fear of Islam has only increased. Most people view the rise of Islam as a threat, but Afshin sees it as a unique opportunity for Christians to show Muslims the love of Christ, especially since they expect to be ostracized in light of events like 9/11.

“Muslims need to understand what true love is. If you have to earn God’s love by how good you are, that’s not love.” As Afshin explains, Islam is a religion of works — at the end of a Muslim’s life, if the good he did outweighs the bad, he will get to heaven.

The premise of Christianity is grace — grace freely given by our heavenly Father. “One of my favorite verses as a former Muslim is Romans 5:8 ‘But God proves His own love for us in that while we were still sinners, Christ died for us.’” Christ gave His life before anyone had the chance to earn God’s love. This love, when shown to Muslims, can be transformative.

Afshin’s decision in high school to follow Christ came with significant hardships. His family would ultimately disown him, and he would further disappoint his father by following God’s call to go into ministry instead of becoming a doctor. “When I broke the news to my father that I wasn’t going to medical school, he called it the biggest stain on his life. He told me, ‘I’ll never be proud of you; I’ll always be ashamed of you as long as I live.’ And those are the hardest words for a man to hear from his father.”

But Afshin’s heavenly Father held him securely in His hands. Afshin arrived in Dallas with only $4 in his pocket, and God provided housing for him, a seminary education, and an internship at Prestonwood Church. And there, at Prestonwood, Afshin met Meredith.

In 1998, Afshin became the college minister at Prestonwood, and Meredith was one of his students. He didn’t date her while she was in his ministry, but he always told his friends, “Whoever marries that girl is going to be so lucky.” He never thought it would be him.

Then, in 2000, Afshin decided to go full-time with his speaking ministry, Afshin Ziafat Ministries (AZM). On his last day as the college pastor, Afshin called Meredith and asked her on a date. He packed up his office, she helped him load the boxes in his car, and they went to dinner. “Literally, the moment I was not a college pastor I was on a date with her!”

But their romance saw several ups and downs. After dating for five years, they ended their relationship shortly after Meredith graduated from college. Afshin had even purchased a ring and planned on proposing, but the timing wasn’t right. So Afshin broke things off.

A year later, he asked Meredith to take him back. Her heart was still broken, and she declined. So he moved back to Houston to start over. “Moving back to Houston was me letting go of trying to make Meredith happen. It wasn’t until I finally said, ‘OK, God, I don’t know where this is going, but I trust You,’ and took my hands off of everything — my ministry and my relationship with Meredith — that God began to rebuild my life. He took my ministry to heights it had never seen before.” Afshin started traveling and speaking extensively and also partnered with Elam Ministries, which trains Iranian pastors in evangelism and teaching.

A couple of years later, Afshin and Meredith’s paths crossed again in Austin, Texas. They immediately realized they were still in love and decided to get back together. Not wanting to lose her again, Afshin quickly purchased an engagement ring and proposed. But Meredith still had some reservations and told Afshin she wasn’t ready to marry him.

Afshin admits his pride was hurt, but God spoke to him in the hurt and said, “If you really love her, you’ll keep pursuing her, and you’ll wait for her just like I kept pursuing you when you turned your back on Me.” So that’s exactly what Afshin did — and Meredith saw this heart change. She shares, “As the Lord spoke to him, Afshin really changed the way he loved me … he was loving me unconditionally. I noticed the difference and was super-excited to marry him.”

In a beautiful restaurant atop a mountain outside of Anchorage, Afshin poured out his heart to the love of his life. He put the ring in the center of a red tulip, which signifies a declaration of love, got on his knee, and proposed. This time, she said yes!

Afshin and Meredith were married in November 2008, almost 10 years after they first met. The theme of their wedding was God’s faithfulness. “He has been so faithful to us,” Afshin says. “For the initial five years we dated, we were not ready to get married. We needed to break up, and God did a deep work in both of us those four years we were apart to solidify our identity in Christ. Then He brought us back together at the right time.”

The Ziafats’ journey as a couple was only just beginning. In 2009, Afshin helped start Vertical, a college ministry at Baylor, and continued to travel and speak with AZM. Meredith worked as a labor and delivery nurse in a local hospital. But God was calling the Ziafats to His church.

In 2010, Afshin was about to sign a contract to become the teaching pastor in a church in Dallas when Providence Church in Frisco began pursuing Afshin to become their lead pastor. “At first, Meredith and I both said, ‘No way!’ We didn’t want to take on the burden. But it was amazing how God turned both of our hearts.”

They moved to Frisco and assumed their new position at Providence Church. That first year, the church almost tripled in size. Two years later, Providence planted a church in the neighboring suburb of McKinney, Texas, and it continues to grow.

God’s greatest blessing to the Ziafats arrived on September 13, 2012, in the form of a beautiful baby girl. Meredith had suffered two miscarriages before having Elyse, which, in Afshin’s words, “made Elyse even more special, the treasure and blessing that she is.” For Afshin and Meredith, their daughter is just one more testament to the inexhaustible faithfulness of God.

When it comes to parenting Elyse, the Ziafats strive to create a gospel-centered environment at home. “We want our parenting not to simply focus on the negative of disobedience but on the incredible blessing of obedience,” Afshin shares. “I want her to know that I don’t seek to follow and obey Christ because of my position as a pastor, but because of my love for Him, which overflows from a grateful heart because of His grace and love toward me.”

God has used Elyse to soften Afshin’s father’s heart toward him. In 2013, Afshin’s father came to hear him preach for the first time. After Afshin’s sermon, his father approached Meredith with tears in his eyes and smiled at Afshin with his hand patting his heart, indicating that he was so proud of his son. “This,” says Afshin, “is a huge testimony to God’s faithfulness.”

Afshin and Meredith continue to pray for his father’s salvation, perhaps now more urgently than ever. In November 2013, Afshin’s father was diagnosed with Alzheimer’s. “It’s not my job to save him; God is the One who saves, but I do feel an even greater burden to be able to share the gospel with him.” Meredith shares this burden. “We’re on our knees every day begging God for his salvation, and we’re willing to share the story of his father’s illness because we want people to pray for him.”

Emily Ellis is a writer and editor based in Nashville, Tenn. Originally from Boston, she studied Hebrew at Tel Aviv University in Israel and continues to be a student of Middle Eastern culture.

This article originally appeared in the April, 2014 issue of HomeLife. Subscribe