If you’ve ever read Paul’s Letter to the Galatians, you may have noticed that it has an entirely different feel than most of his other New Testament letters. Instead of being warm and welcoming, encouraging the Galatians in the Lord, Paul seemed to be reprimanding them. Instead of offering friendly warm fuzzies, Paul was correcting the churches of Galatia, warning them to change their ways. More than that, Paul was challenging them to shift their understanding of the gospel of Christ. They had, just a short time after his departure, embraced a different gospel from the one he had taught them. They added to “saved by grace through faith alone” by making it “grace through faith plus whatever the religious leaders thought they needed to do to look the part.” They were trying to please those around them by looking the way those people thought devout Christians should.

Paul was livid. In chapter 1 he declares, “As we have said before, I now say again: If anyone is preaching to you a gospel contrary to what you received, a curse be on him! For am I now trying to persuade people, or God? Or am I striving to please people? If I were still trying to please people, I would not be a servant of Christ.” (verses 9–10).

Those are pretty strong words! Change the gospel Paul preached even just a little bit and be cursed? He makes his case even stronger one verse before when he says, “But even if we or an angel from heaven should preach to you a gospel contrary to the one we preached to you, a curse be on him!” (verse 8). Paul was willing to curse even himself if he somehow began to preach a different gospel! That’s how strongly he felt that the only One we need to concern ourselves with pleasing is God Himself.

If padding our own egos — looking good to those around us — is more important to us than making God look good, we’re believing a false gospel. We’ve lost the prize of our faith, Jesus Himself. As my pastor once said, “When healthy, wealthy, happy, free, and safe become our pursuit, Jesus is no longer our prize, and that’s when the true gospel stops advancing.”

Several years ago my family began a quest for healthier living. We began to look carefully at what we were putting in and on our bodies. Thirty-five at the time, I felt physically and emotionally unable to go where God was leading our family because of my health. I knew something needed to change and not just for me. I wanted to leave a legacy of health for my boys.

I went a little wild.

Unfortunately, my crusade fell right at the beginning of summer. We spend several days of our summer visiting family members who have a place near the lake not far from our home. While we’re there, we eat. But that summer — the summer of the health nut, as it’s become known — I changed everything. I had become convinced that if my children consumed even an ounce of red dye, I was sinning against them. It was ugly. We made two visits to the lake under these strict new menu rules and regulations before I realized I was driving everyone crazy, including myself.

I had taken a noble idea — to make healthy choices for my kids and give their bodies the best of what nature has to offer— and made it an obsession. I was no longer a good mom when they ate sugar. Their health had become my prize, and in making it that, I alienated those around me — people whom I love and who are good parents. I loved my discipline, my cause — what I thought was going to save me and my kids — more than I loved relationships with other people. I was putting my faith in food to save us. Not to save us from sin, but to protect us, keep us safe — something that is only God’s job.

We humans have a tendency to take something good and make it sinful. Healthy living isn’t bad, but obsessing over it takes our eyes off the true prize and places them instead on something that doesn’t have the power to save.

When wealth is our prize, we’ll be most concerned with setting our kids up for financial success. We’ll strive to position them for top grades, the best schools, and the highestpaying jobs. We’ll forget that God cares more about their character and their holiness than how much money they make.

At a conference I once attended, I heard Ken Ham, of Answers in Genesis, say something like “If my children turn out to be ditchdiggers who love Jesus, I’ll be OK!” In our home my husband and I try hard to keep this truth at the forefront of our educational efforts. Admittedly it’s hard. Comparison can steal our joy and make us think we’re not doing enough. Ultimately, God is their provider, and we have no idea what He has planned for them. If they end up with what the world might consider menial jobs but are following hard after Jesus, we’ll be thrilled.

When happiness is the prize, we’ll care more about what our children want than what they really need. We’ll become those parents who go to teachers and demand good grades when they aren’t deserved, who buy their children too much car for their maturity, who purchase every new toy in an effort to keep them from complaining.

Should we give our children whatever they want just because it makes them happy? If so, we’ll create entitled adults. Should we get them out of serious messes to protect their happiness? If so, we’ll raise shallow people who don’t understand the law of consequences. Happiness as the prize will fail us every time and may even prevent our children from becoming who God wants them to be. Happiness is relative and based on circumstances, and it simply isn’t the most important thing to God.

Brooke McGlothlin is cofounder and president of Raising Boys Ministries and The MOB (Mothers of Boys) Society, an online community for BoyMoms. She earned her B.S. in Psychology from Virginia Tech (1999) and her Masters in Counseling from Liberty University (2003). Brooke has been a featured blogger at Lifeway’s ParentLife blog, the Proverbs 31 Devotional Site, and Ann Voskamp’s A Holy Experience. She’s the author of several books and resources for moms, and lives in the mountains of southwest Virginia with her husband and their two sons. 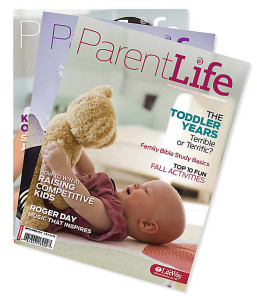