The Endurance of Our Hope

The Point: We can endure suffering because of our hope in Christ.

Use the following as you introduce the session.

Much of America’s focus has shifted from the COVID-19 pandemic to what pastor Dr. Tony Evans calls a “cultural pandemic.” On May 25th, George Floyd was killed when a police officer knelt on Floyd’s neck for over 8 minutes. After video footage surfaced showing the death of Floyd, people across the country and the world have stepped up to protest racial inequality and injustice. In a Facebook post on May 30th, also shared on twitter, Dr. Evans called for a unified church response, “We must rise up together to rectify the individual & systemic issues we face.”

As we look at the events happening around us, we may feel hopeless about the possibility for real change. But there is hope—hope for unity, hope for justice, hope for peace. Jesus suffered the ultimate injustice, dying on the cross for our sins. But that was not the end. Jesus Christ rose from the dead and ascended to the right hand of God. Christ has conquered death. Christ has conquered sin. The death and resurrection of Jesus Christ gives us hope. Dr. Evans also reminds us to stay focused on God, even in times of suffering. On May 29th, he tweeted, “It’s easy to praise Him in the sunshine, but your breakthrough comes when you praise Him in the dark. He’s there.”

Nikki Wilbanks grew up in Tennessee before heading to California to study literature at Pepperdine University. After graduation, she enjoyed a decade-long career as a commercial real estate appraiser and investor. Having returned to Tennessee with her husband, she is now thrilled to be a stay-at-home mom, writer, and Bible study teacher.

Study the Bible [Option for Senior Adults and Young Adults]

Use the following optional activity at the beginning of the second Scripture division: Display a picture of the Apollo 11 reentry capsule.  (Click here for a royalty-free image.) Share the following: This capsule was engineered to protect the three astronauts as they reentered the earth’s atmosphere. The temperature on the outside of the capsule as it reentered the atmosphere reached temperatures up to 5,000 degrees Fahrenheit. In addition, the astronauts were traveling well over 20,000 mph. Either of these factors would have caused instant death, but the capsule carried them through and brought them home safely. In the same way, our hope in Christ carries us through any circumstances or suffering. This doesn’t mean we’re immune from pain or even death, but it does mean our hope in Christ will bring us home.

Use the following as you conclude the session.

Faithlife recently published a report titled, “Trends in worship music during the season of COVID-19.” The report includes a list of “the [worship] songs that had the largest % increase in usage during March 15-31 and April 20 – May 10 when compared to their usage in February, before lockdowns due to COVID-19 were put into effect.” The data was gathered from Faithlife Proclaim, which is the company’s church presentation software. Faithlife provided a list of 33 songs with significant increases in usage, and then sorted these songs based on over all popularity. The song topping the list was the hymn “It Is Well With My Soul.”

According to the Library of Congress, Horatio Spafford wrote the hymn after all four of his children drowned when the ocean liner his wife and children were traveling on sank in 1873. Spafford’s wife was found alive and sent him a transatlantic cable, “Saved alone. What shall I do.” As Spafford crossed the Atlantic to reunite with his wife, he passed the area where his children had drowned. Spafford wrote the hymn during that voyage. In a letter to his wife’s half-sister, Spafford wrote, “On Thursday last we passed over the spot where she went down, in mid-ocean, the waters three miles deep. But I do not think of our dear ones there. They are safe, folded, the dear lambs.”

As you listen to this song, consider how Spafford’s hope in Christ helped him endure suffering.

Play the hymn for your group. A virtual cell phone choir recording from March is available here.

How will hope in Christ change the way you face suffering? Choose one of the Live It Out statements for this week.

Nikki Wilbanks grew up in Tennessee before heading to California to study literature at Pepperdine University. After graduation, she enjoyed a decade-long career as a commercial real estate appraiser and investor. Having returned to Tennessee with her husband, she is now thrilled to be a stay-at-home mom, writer, and Bible study teacher.

Persevering When Everything Else Tells You to Quit 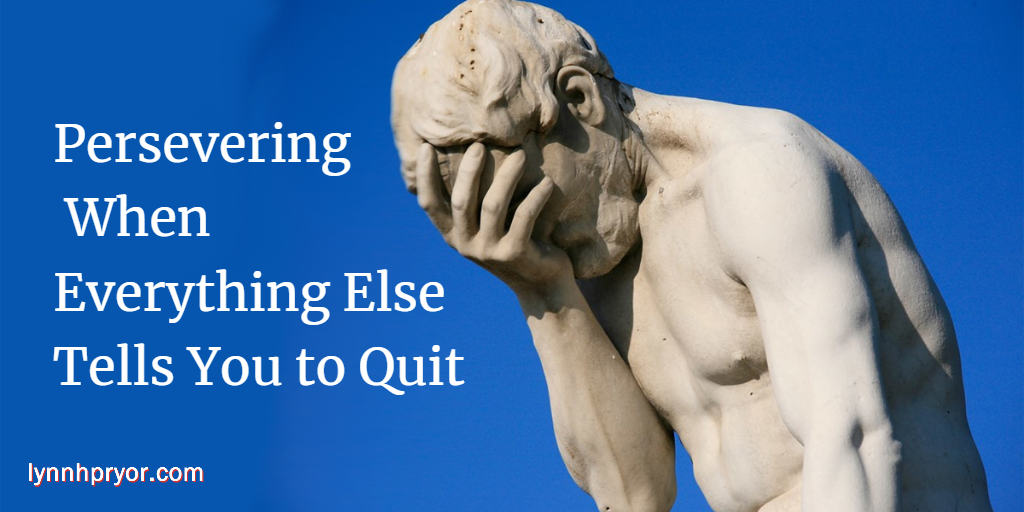