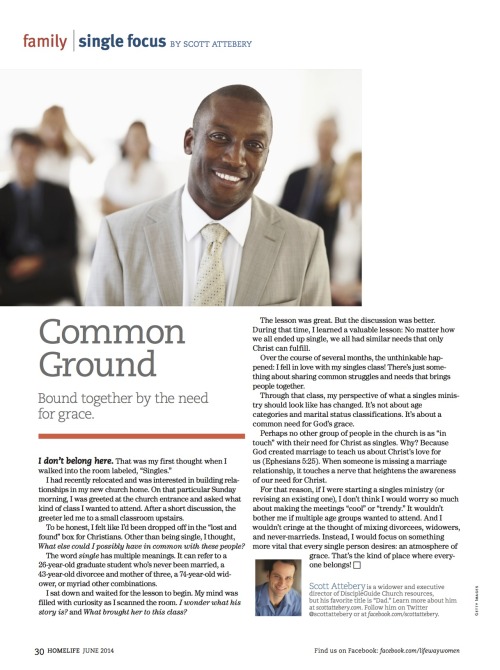 Bound together by the need for grace.

I don’t belong here. That was my first thought when I walked into the room labeled, “Singles.”

I had recently relocated and was interested in building rela- tionships in my new church home. On that particular Sunday morning, I was greeted at the church entrance and asked what kind of class I wanted to attend. After a short discussion, the greeter led me to a small classroom upstairs.

To be honest, I felt like I’d been dropped off in the “lost and found” box for Christians. Other than being single, I thought, What else could I possibly have in common with these people?

The word single has multiple meanings. It can refer to a 26-year-old graduate student who’s never been married, a 43-year-old divorcee and mother of three, a 74-year-old wid- ower, or myriad other combinations.

I sat down and waited for the lesson to begin. My mind was filled with curiosity as I scanned the room. I wonder what his story is? and What brought her to this class?

The lesson was great. But the discussion was better. During that time, I learned a valuable lesson: No matter how we all ended up single, we all had similar needs that only Christ can fulfill.

Over the course of several months, the unthinkable hap- pened: I fell in love with my singles class! There’s just some- thing about sharing common struggles and needs that brings people together.

Through that class, my perspective of what a singles minis- try should look like has changed. It’s not about age
categories and marital status classifications. It’s about a common need for God’s grace.

Perhaps no other group of people in the church is as “in touch” with their need for Christ as singles. Why? Because God created marriage to teach us about Christ’s love for us (Ephesians 5:25). When someone is missing a marriage relationship, it touches a nerve that heightens the awareness of our need for Christ.

For that reason, if I were starting a singles ministry (or revising an existing one), I don’t think I would worry so much about making the meetings “cool” or “trendy.” It wouldn’t bother me if multiple age groups wanted to attend. And I wouldn’t cringe at the thought of mixing divorcees, widowers, and never-marrieds. Instead, I would focus on something more vital that every single person desires: an atmosphere of grace. That’s the kind of place where everyone belongs! •

Scott Attebery is a widower and executive director of DiscipleGuide Church resources,
but his favorite title is “Dad.” Learn more about him at scottattebery.com. Follow him on Twitter @scottattebery or at facebook.com/scottattebery.

This article originally appeared in the June 2014 issue of Home Life. Subscribe