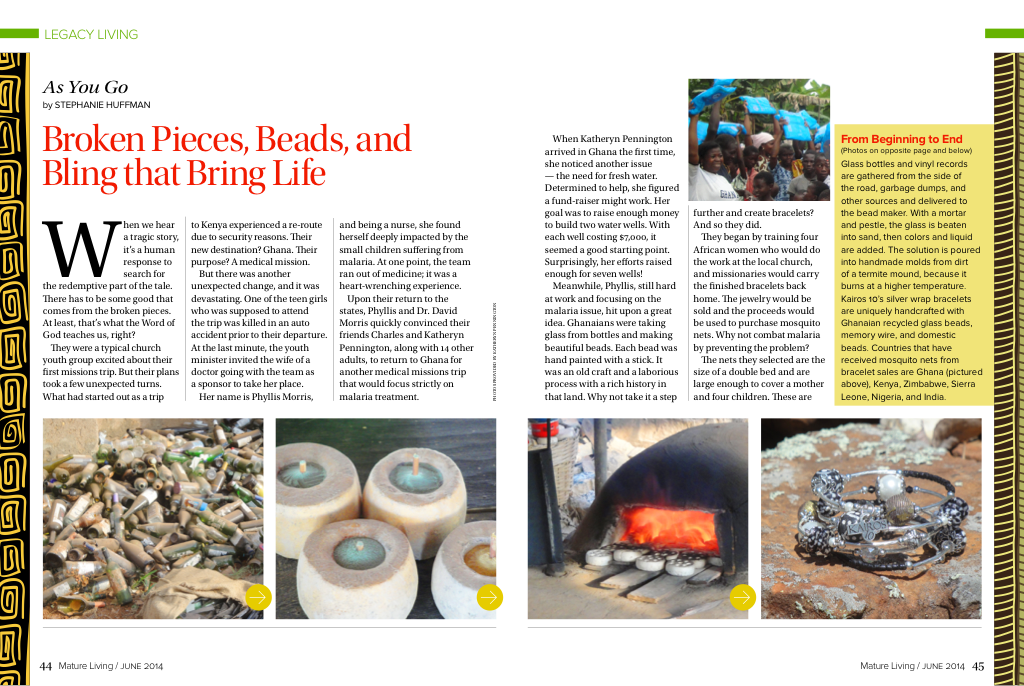 When we hear a tragic story, it’s a human response to search for the redemptive part of the tale. There has to be some good that comes from the broken pieces. At least, that’s what the Word of God teaches us, right?

They were a typical church youth group excited about their first missions trip. But their plans took a few unexpected turns. What had started out as a trip to Kenya experienced a re-route due to security reasons. Their new destination? Ghana. Their purpose? A medical mission.

But there was another unexpected change, and it was devastating. One of the teen girls who was supposed to attend the trip was killed in an auto accident prior to their departure. At the last minute, the youth minister invited the wife of a doctor going with the team as a sponsor to take her place.

Her name is Phyllis Morris, and being a nurse, she found herself deeply impacted by the small children suffering from malaria. At one point, the team ran out of medicine; it was a heart-wrenching experience.

Upon their return to the states, Phyllis and Dr. David Morris quickly convinced their friends Charles and Katheryn Pennington, along with 14 other adults, to return to Ghana for another medical missions trip that would focus strictly on malaria treatment.

When Katheryn Pennington arrived in Ghana the first time, she noticed another issue — the need for fresh water. Determined to help, she figured a fund-raiser might work. Her goal was to raise enough money to build two water wells. With each well costing $7,000, it seemed a good starting point. Surprisingly, her efforts raised enough for seven wells!

Meanwhile, Phyllis, still hard at work and focusing on the malaria issue, hit upon a great idea. Ghanaians were taking glass from bottles and making beautiful beads. Each bead was hand painted with a stick. It was an old craft and a laborious process with a rich history in that land. Why not take it a step further and create bracelets? And so they did.

They began by training four African women who would do the work at the local church, and missionaries would carry the finished bracelets back home. The jewelry would be sold and the proceeds would be used to purchase mosquito nets. Why not combat malaria by preventing the problem?

The nets they selected are the size of a double bed and are large enough to cover a mother and four children. These are insecticide-treated nets (ITNs) — the insecticide is woven into the thread and lasts up to five years. Average villagers can’t afford them, as they cost in what amounts to one week’s wages. So the bracelet team partnered with a local pastor, who would use the money to purchase the nets.

The nets have opened doors for him to enter into Muslim villages that are closed to the gospel. He’s now told by village leaders, “You have mosquito nets; you can come.”

Pastor Odai tells them, “If God loves you so much to send you a mosquito net, imagine how much more He loves you to send His son to die for you and provide you with eternal coverage!” Amazing how it all comes down to a little piece of jewelry. The bracelet leads to the net, which leads to the pastor, who leads people to Christ.

The Kairos 10 team members could never have dreamed how far their project would reach. It was Christmas, and they hoped to sell 300 bracelets. They sold 565! When they ran out of jewelry, American volunteers were recruited to fill orders. “It’s a miracle!” exclaims Katheryn. “We just wanted to sell 300!”

The organization, known as Kairos 10 (501c3), has purchased over 26,000 mosquito nets since its inception in 2010. With each net able to cover five people, that makes for about 125,000 villagers currently being protected from the mosquitoes carrying malaria. Nets have also been sent to Ghana, Kenya, Zimbabwe, Sierra Leone, Nigeria, Uganda, and India.

They’re now buying beads in bulk in Ghana and continue to hire more beaders. One mother of three was selling her wares off the top of her head. The pastor asked Kairos 10 to teach her anything, just to get her off the street. She’s now their fastest beader and uses her money to send her son to school “so he doesn’t have to grow like me,” she tells them.

One woman in her 60s, who lived under the stairwell of the church, couldn’t see without glasses but was making brace­lets anyway! They had no idea how she could do it, as lighting is poor and the holes and beads are so tiny. Kairos 10 assisted in securing her a prescription and she now can see the beads.

Things were happening stateside, too. “What we found was that women liked what we were doing,” shares Katheryn. “They’d say, ‘Give me a shoe box full. I’ll sell them.’”

Leah, 70, has been on four trips. Katheryn boasts, “She loves it. She does speaking engagements and even got hip replacement surgery so she could go on her fifth trip!”

Another lady, now 80, has been responsible for locating a benefactor that has since built a school.

The project is bringing together women of all ages from across the nation.

When the bracelets arrive, they need to be inspected, tagged, bagged, and more. Ladies who pitch in to help have come to refer to themselves as “Ghana Girls.” Katheryn’s husband was aware of a woman who didn’t seem to have any friends. He invited her to join the ladies. She was later diagnosed with breast cancer and sent word back, “Would you tell my new friends to pray for me?” She had only been with them two times and didn’t have a church to call her own. The volunteers were now also ministering.

The workers from the U.S. are volunteers, and all proceeds go back into the projects. A clinic has since been built, as well as a school and more water wells. A non-profit pharmaceutical company, that works with missionaries, is also taking drugs overseas and has paid for a malaria-treating drug. A fund-raising arm was even created for other churches needing to raise money for their trips. Rather than selling candy or wrapping paper, they’re selling bracelets.

But our story, like the brace­lets, comes full circle. When that precious teenage girl lost her life, something was gained here on earth. Her mother ultimately joined the team in Africa and was able to help build a chapel in Ghana with funds raised in her daughter’s honor. Though we never fully understand the broken parts of our lives, it’s truly amazing when God brings all the pieces, like the beads, together and forms something of beauty.

When asked to leave a parting word to readers, Katheryn paused, then remarked, “I think that if someone has an idea, it can die. But if someone has a dream, the dream lives on. If that dream includes the Holy Spirit, then you have to be responsive and you have to step out. I’m here doing my part and God’s doing His.”

STEPHANIE HUFFMAN is author of When You Grow Up & Get … Single. She is a Nashville-based writer and creative consultant. Stephanie enjoys teaching women the Bible and is the founder of the Chix Chat Clubs: a unique Bible study experience for women. (StephanieHuffman.org)